Zoho Corp. drew a line in the sand between it and several Silicon Valley tech firms that it described as "surveillance services" at its analyst event in Cedar Creek, Texas, on Jan. 30.

Zoho made a promise to its customers that it wouldn't sell their data and that customers owned their data. It committed to comply with the European Union's General Data Protection Regulation (GDPR) globally. It also committed to remove any third-party tracking technology from its web properties or mobile apps. It pointed a finger at several brands specifically, naming Google, Facebook, and Twitter as "adjunct surveillance" companies. Meanwhile, it more closely aligned itself with Apple's pro-privacy messaging.

"We are block adjunct surveillance for our users," said Raju Vegesna, a chief evangelist at Zoho. "You're using surveillance services out there and you're paying with your data...these companies are collecting data from adjunct properties without your permission."

While the common business model of many web-based services to offer a service for free and sell targeted advertising to make money is legal, Zoho acknowledged, it's not a moral approach in the eyes of the Chennai, India-based firm. Zoho made the announcement just two days after International Privacy Day, on Jan. 28.

"This is an industry-wide problem, we have to do something about it," Vegesna said on stage in front of about 150 industry analysts. He also called out other business-to-business software companies that "allow surveillance companies to monitor their users on their properties." In one example, he showed trackers found on Netsuite's web properties – a list that included Google AdWords tracking, Eloqua, Google Analytics, Bing, and other widgets.

It's common practice for business with websites to either provide space to deliver programmatic advertising from Google or to make use of free software tools like Google Analytics to better understand their users' behavior. Instead of charging for these free products, tech vendors collect more data about user behavior on the web to feed their advertising targeting algorithms.

Now Zoho will comb through all its websites – as many 20,000 to 30,000 different websites representing its broad product suite across various regions – and remove all trackers that ship data off to third parties, Vegesna clarified in an interview. Features like the Facebook Pixel and any embedded Twitter features will be removed. It will also remove any tracking services from its mobile apps, which help collect analytics on user engagement. Zoho applications that offer integration with Google, Facebook, Twitter, etc. will not be altered and will continue to support those services as they did previously.

In cutting ties with tech services dependent on ad-based business models and describing them as immoral, Zoho is placing itself in an ideological club of tech firms that most notably includes Apple.

Apple's business model for its products and services is to charge users directly, often through a subscription model. Apple CEO Tim Cook has promised users that Apple will respect their privacy, drawing a distinction between Apple's iPhone and smartphones using Google's Android OS. Apple drew a lot of attention for its conflict with the FBI, in which it refused to assist it with breaking the encryption on a suspect's iPhone. Apple has taken a stand on strong encryption, insisting that government can't bypass it, even when it would aid a criminal investigation.

Apple has gone as far as calling privacy a human right and names it as one of its core values. But Apple hasn't cut off third-party apps downloaded to an iOS device from using trackers, and it's still likely the average iPhone user has thousands of such trackers ferreting out information without their consent.

Zoho didn't mention Apple during its privacy announcement. But it did reference the trillion-dollar firm earlier in its analyst event. Vegesna compared Zoho to Apple because both companies own their entire tech stack. He also mentioned Apple is a customer of Zoho, using its Zoho Monitoring software, which tracks the health and usage of an organization's IT assets.

In reference to the privacy announcement, Vegesna said that Zoho's control over its tech stack gives it the capability to remove trackers. 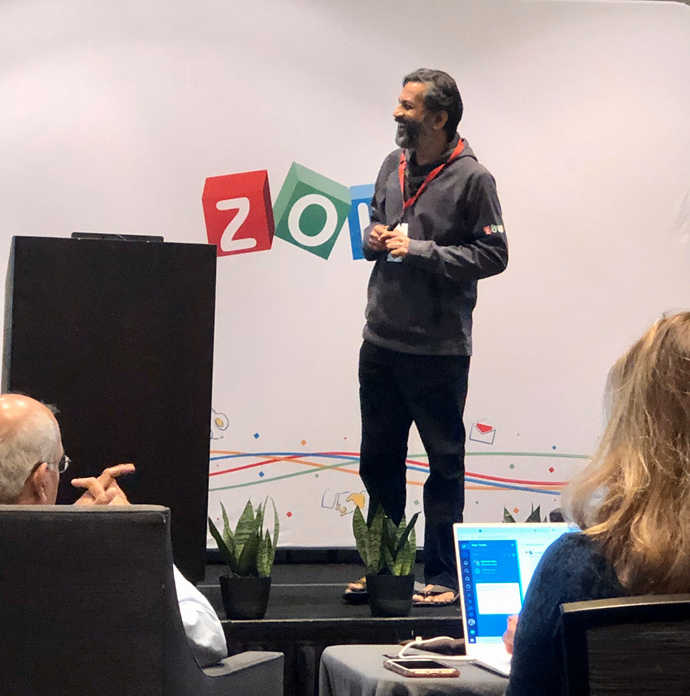 Big technology firms like Google have approached Zoho seeking exchanges of user data, Zoho CEO Sridhar Vembu said in an interview. The pitch was that Zoho would gain new insights about its customers. Zoho declined the offer.

"We live in a society where companies have the capability to track you to know what you're doing at any given moment," Vembu said. "But awareness is growing about the costs of personal data being out there."

Vembu drew a parallel between tech surveillance and smoking. He said that if the same analyst event had occurred 40 years ago, then it'd be likely a significant portion of the attendees would be smoking indoors during the presentations. But today that behavior is considered unacceptable.