Now that we’re actually living in the year 2020, it’s interesting to look back on some whimsical predictions of the futuristic meccas we’d be inhabiting that didn’t quite work out.

We don’t live in buildings made of steel, as Thomas Edison predicted we would. We don’t have access to flying cars, even though Uber promised in 2017 that it was just three years away from launching them. Amazon isn’t yet delivering our packages by drone. And there’s no Hyperloop transport system available to quickly commute between cities. All considered, it’s a bit of a letdown for urban dwellers. Instead of reveling in a technological future-state, we’re just dealing with the same old discomforts of noisy environments, overcrowding, and pollution.

But perhaps 2020 doesn’t have to be about big shiny new vehicles transporting us in comfort. Sometimes, it’s the small things that can make all the difference. At the Smart Cities and Internet of Things (IoT) Forum hosted by Enterprise Ireland in Dublin at the beginning of December, several Irish IoT manufacturers showcased how they provide a salve to some of the pains of urban living.

Connected sensors might not be big and flashy, but they’re already helping to solve some problems around urban living as more of the world’s population condenses into cities. While the world is waiting for 5G wireless technology as the connective tissue that will really make IoT solutions flex their muscle, there’s already some interesting examples deployed today.

Toronto is just one example of a large city that’s introducing stricter noise regulations, with a bylaw it passed in October. As urban densification trends continue, one inevitable result is residential areas butting up against industrial yards, which can produce a lot of noise. Governments or industry bodies can introduce rules to limit how much sound can be made and when it can be made, but those rules are impossible to enforce without proper ways to monitor.

Dublin-based Sonitus Systems is a 12-year-old firm that originally spun out of Trinity College. Its mission is to make low-cost sound monitors that are robust enough to be placed outdoors. It pairs the devices with proprietary software that delivers real-time data to a web-based platform.

“It’s plug and play, you don’t have to be an expert to deploy this,” says Bartley McElroy, director of Sonitus Systems. “Place the microphone and switch it on. You know it’s on when the green light is on.” 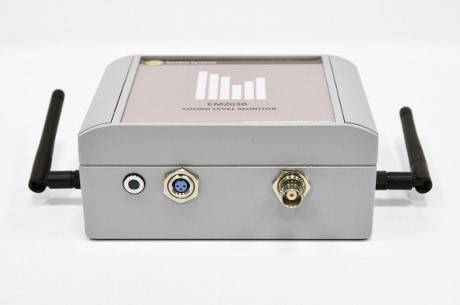 Above: The Sonitus EM2030 Sound Level Monitor provides a weatherproof shell and a microphone with wide dynamic range to help track onsite noise levels. It can be connected via Wi-Fi or cellular.

Sonitus is already deployed with 300 clients spread across various countries. Its first use-case study came locally, with the Dublin City Council. It deployed its devices at noise hot spots around the city in order to collect information that will help inform policy, according to Paul McDonald, Managing Director at Sonitus. The technology is also used by Vancouver’s Port Authority and the City of Santiago, to name a couple of clients.

In 2020, Sonitus will be exploring how machine learning can improve its services with a university research group. They hope to be able to train their software to identify useful audio and separate it from garbage audio. The idea came after a Sweden-based customer requested that they filter out all sound made by seagull flocks (which are noisy enough to trigger sound alerts but won’t quiet down no matter how politely you ask them).

Don’t Get Lost in a Crowd

Millions of drivers already rely on real-time traffic-reporting solutions built into apps like Google Maps and Waze. Roadways are color-coded to represent traffic flow, which is made possible by detecting how many cell phones are present on those roads at the same time (think about how rare it is that a vehicle wouldn’t have a cell phone in it these days). Now Think Smarter Analytics, another Dublin-based firm, wants to apply that same principle to tracking pedestrian traffic, or what it calls footfall traffic.

Its clients provide a mapping of their Wi-Fi hotspots – or Think Smarter Analytics will provide a beacon that is also capable of delivering Wi-Fi service – and it displays traffic hot spots visually using Google Maps. The technology works by reading the MAC address of each smartphone that has its Wi-Fi receiver turned on (which the company then hashes for privacy purposes).

So far the main clients for the technology are city governments. Dublin is using it to monitor its concert hall area and docks area. Understanding pedestrian traffic flows could help cities design better spaces to avoid overcrowding. Advertisers are another potential client, as they could see if a billboard ad for a restaurant that’s in proximity persuades more people to head in for a bite.

Gas leaks that posed public health threats were a common occurrence in the 2010s. In Boston and New York, aging natural gas pipes were an issue. In Toronto basements, radon rose up from the earth below. Dublin-based environmental monitoring company Ambisense wants to help detect problems like that before they cause any harm.

Spun out of Dublin University, the firm doesn’t manufacture sensors but provides an analytics solution that partners with a range of air and water quality sensor equipment makers. It aims to provide environmental consultants working for governments and construction firms with a complete picture of what’s happening on sites of concern. Users can determine how often they get sample reports over a 24-hour period, providing a clear picture compared to just a single check.

Lewis Carrol on DataOps: No Data Today, All Data Tomorrow?

The beauty of good story telling is its applicability to the most unexpected situations. In 1871, Lewis Carroll wrote about the evil Queen trying to convince Alice to work for her, with a promise of “jam to-morrow and jam yesterday – but never jam to-day.” Little did he know that this one statement would be used by economists, politicians, playwrights, and musicians long after he wrote it – it's time to add data analysts to the list.

Board International Solution Marketplace Gets SOC Compliance: Prêt-à-Porter Solutions and Assured Security in the Cloud

Board International follows the trend of delivering solutions by opening a solution marketplace while strengthening customer trust by getting SOC-2 and SOC-3 certifications.

AnswerRocket, “The AI-Driven Analyst for Everyone”

There’s a proliferation of AI-driven/AI-powered/AI-[insert-your-own-favorite-verb-here] tools and products on the market, because AI – and its underlying technology, machine learning – is sexy and it sells. (And, in some cases, delivers.) We decided to take a look at one of the vendors, AnswerRocket.

AWS Lake Formation makes it easier for users to set up and manage data lakes. But organizations will face challenges in determining how to derive value from their data lakes.

DataOps is a complex topic. Industry leaders such as LinkedIn, Airbnb, and Uber have created their own operations platforms. Without open standards currently in place, Cloudera promises to incorporate an open standard in its upcoming product feature.