When I asked a colleague what his first thought was when he heard the term “AI,” his response was the movie Terminator, starring Arnold Schwarzenegger. I’m willing to wager that most responses to this question would elicit images of the fantastical – extremely advanced technology that far surpasses the current capabilities of AI and only truly exists in Hollywood.

Merriam-Webster defines artificial intelligence as 1) a branch of computer science dealing with the simulation of intelligent behavior in computers, and 2) the capability of a machine to imitate intelligent human behavior. These definitions are quite accurate in the technical sense; however, after consuming the ubiquitous marketing hype from the likes of IBM, Amazon.com, Google, Salesforce.com and others, you may expect a bit more from AI-powered technology than is currently realistic.

AI has experienced hard-earned moments in the limelight. IBM Watson’s 2011 epic victory over two of the most prodigious Jeopardy champions of all time was an impressive feat, albeit at the expense of several million dollars and a full-time team of 20 IBM researchers working toward this goal for three years. Worse, they branched the Watson code and could not repurpose it for revenue-producing projects.

A more recent victory for the AI eco-system was by Google’s AlphaGo, which recently defeated the world’s top Go player (China’s Ke Jie), a feat thought to be years, if not decades, off. Most impressive is the fact that AlphaGo completed this task using a single Google cloud machine that consumed an order of magnitude less compute power than the instance of AlphaGo used a year ago to defeat a lesser-known professional Go player (Korea’s Lee Sedol). In fact, in breaking news, AlphaGo has defeated Ke Jie a second time, securing a 2-0 lead and victory in the best of 3 series. Perhaps even more impressive is the AI poker player, Libratus, who just took four world champion poker players to the woodshed, winning $1.77 million in poker chips over 120,000 hands of poker.

Many of us are enamored with the advances in AI as seen through the consumer lens in virtual assistants such as Apple Siri, Google Home, Microsoft Cortana, or Amazon’s Echo. The future is AI… but where does AI fit into today’s business and IT value proposition and budget? As indicated by the chart below, most consumer-based AI products are at best minor enhancements to improve the drudgery of daily tasks. 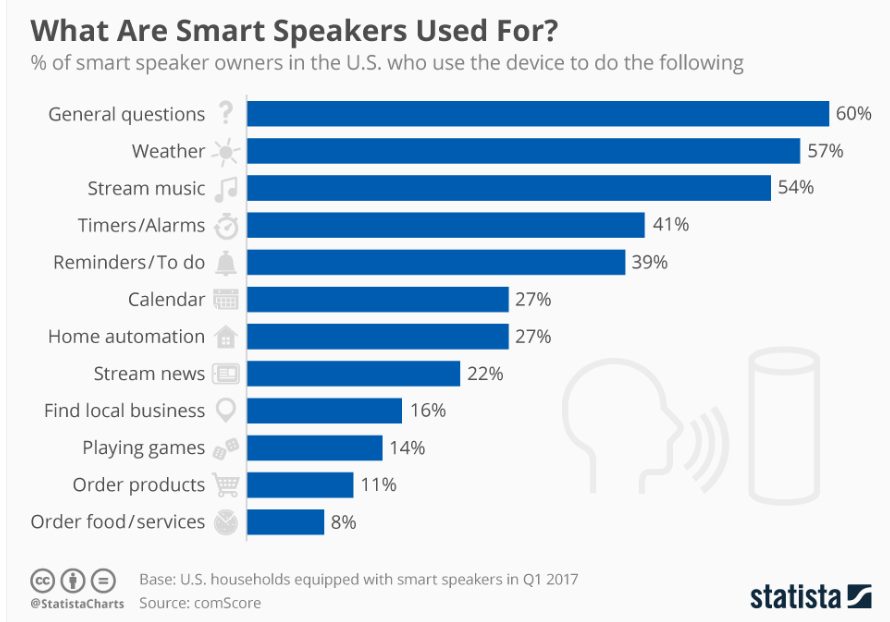 And they really aren’t that good at it. 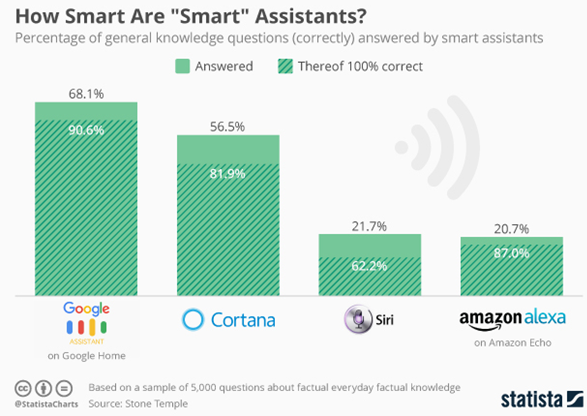 While AI may still be in its infancy, the patent application activity of the “Big 5” clearly demonstrates it is the path forward, as noted by CB Insights. Microsoft is the clear leader in terms of recent patent activity in the AI space as well, outpacing the pack with over 200 related patent applications since 2009. 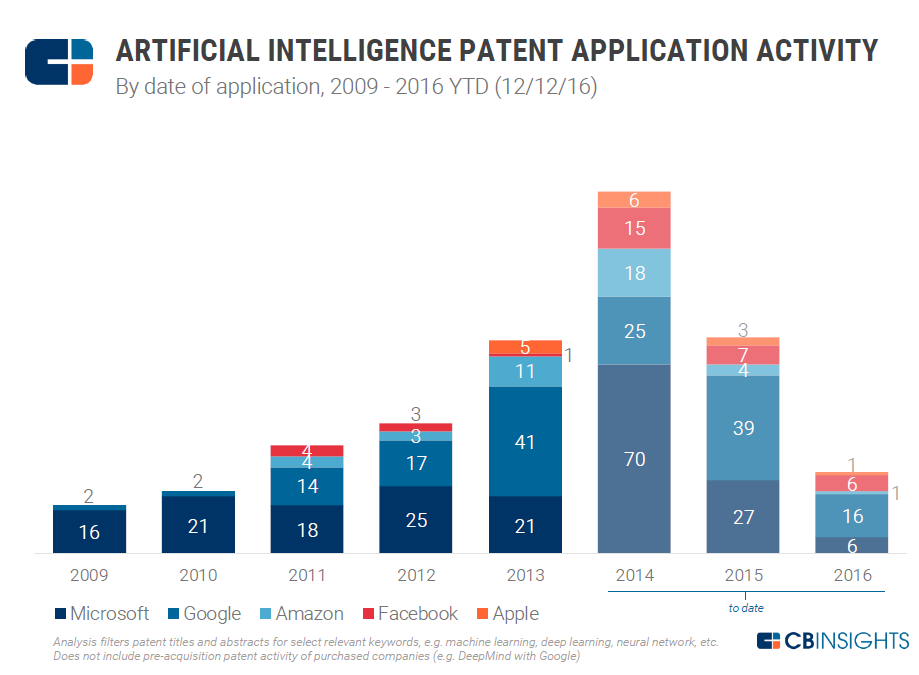 AI in the enterprise can be an expensive proposition

The cold reality is that there is no real “intelligence” in AI, no “cognitive” function in IBM’s Cognitive Computing, and no “genius” in Salesforce.com’s Einstein. While technology progress in this realm is real and the advances are significant, the marketing machine has infected us all to some degree (this author included). When broken down to the basic components, AI applications are algorithmically driven programs that have programmed responses to data inputs. The algorithms are extremely complex and the data sources can be massive. This combination of large-scale computing running enormously complex algorithms in blazing speed can seem akin to magic.

So where does the proverbial rubber hit the road with AI investments in the enterprise sector? There have been some notable stumbles with IBM’s Watson initiative in this space. MD Anderson Cancer Center recently pulled the plug on the Oncology Expert Adviser (OEA) project after shovelling $62 million into the effort. Perhaps the just released OncoKB, an oncology database product jointly launched by IBM and Quest Diagnostics in partnership with Memorial Sloan Kettering Cancer Center, will achieve better results. We are seeing great science from Big Blue, but progress is still limited in the commercial applications space.

Salesforce “drinks its own Kool-Aid,” running every facet of the business off the Salesforce platform. Further, Marc Benioff, CEO of Salesforce.com, leverages a beta version of a product called Einstein Guidance during his weekly staff meetings to call out executives who may be padding the numbers. This quote speaks volumes:

"For a CEO, typically the way it works is, of course, you have various people, mostly politicians and bureaucrats, in your staff meeting who are telling you what they want to tell you to kind of get you to believe what they want you to believe. Einstein comes without bias. So because it's just based on the data, it's a very exciting next-generation tool.

To have Einstein guidance has transformed me as a CEO."

Contrast this with IBM, which reportedly does not use Watson to run any significant portion of its business. Online blogs and forums are replete with IBM salespeople lamenting the fact they must try to sell a product that their own company has not adopted. As an ironic side note, Salesforce just inked a partnership with IBM to incorporate external data from Watson as an overlay to the Salesforce-specific data currently leveraged by Einstein.

Salesforce’s approach to tackling the AI challenge has been to invest strongly via acquisition coupled with organic R&D. The company has quickly developed a broad and deep expertise in the key AI components of machine learning, big data, deep learning, and NLP, and it has the human talent to put this knowledge to use. Salesforce’s stated goal is to bring the data scientist to the customer. This may sound like marketing hype, but many organizations are investing heavily to organically build their resident AI functionality in house. Consider the costs involved in maintaining the personnel, technology, and infrastructure to take on this endeavor. Only the largest enterprises can afford to take such a large R&D risk. The Salesforce approach holds great value and appeal for the SMB market segment that may feel a little left out of the AI tidal wave washing over the IT industry. Why is this the case?

Three components set Salesforce apart from other companies seeking to embed AI into the enterprise. It has almost two decades of customer data from which to extract insights that drive system recommendations for its customers. Over the course of its history, Salesforce has developed a deep understanding of the business processes for which its products are targeted (e.g. CRM: Sales Cloud, Service Desk: Service Cloud, etc.). Finally, as mentioned above, Marc Benioff has made massive investments in acquisitions and organic development of AI technologies and talent in the data scientist space. When bundled together, the Salesforce AI offerings are highly data-driven algorithms to accelerate key aspects of its customers’ business processes.

As an example, I refer you to lead scoring. With almost 20 years of customer data, Salesforce can identify the types of leads that will convert to desired commercial outcomes. By applying these insights to other data sets, high-quality leads can be identified against any customer’s data, along with shortcomings in the business process workflow, all in an automated manner.

Does it work? Coca-Cola thinks so (see case study below), and apparently so does Dell. The recently announced partnership between Salesforce.com and Dell Technologies will expand Salesforce.com to approximately forty thousand Dell employees, and includes the deployment of Einstein Service Cloud.

Salesforce recently held a Salesforce Live event that showcased Coca-Cola’s incorporation of Einstein on a massive scale. Coca-Cola utilizes Salesforce Sales, Service and Marketing Clouds, as well as the Communities portal product. The demo layered in the use of Einstein Vision, which allows customers to take a picture of a cooler from which the exact quantity of units is calculated via Object Recognition algorithms, then incorporated with the Community Partner portal, ultimately presenting a sales order with recommended product mix to the customer. Factor in the scale and ROI of Coca-Cola doing this across 16 million coolers worldwide, and then compare this to the previous method of manual count inventory. The impact is staggering.

Avoid massive investment in specialized, scarce, and expensive human resources in an effort to build your own AI capabilities. Consider companies such as Salesforce that have invested heavily to build an organic and deep integration of AI capabilities into its core products, thus offering a higher probability for organizations to extend their existing investments in the CRM space to drive a tangible ROI.

Traditional accounting practices are tailor made for waterfall project management. Organizations that have transitioned to the use of standing product teams using Agile and DevOps need to transform their accounting practices as well or they will leave valuable capital expenditure dollars on the table.

Scaling Agile – Essential for Your Organization

So you’ve gone Agile. You do daily scrums, retrospectives, and all the “right” Agile ceremonies. But still your organization isn’t quite convinced. It is now critical to balance the drivers and goals of both Agile and traditional thinking in order to achieve organizational success.

Do you feel like your Agile teams are treading water – going through the motions but never going anywhere? It’s a risk, and practices such as daily standups, retrospectives, and demonstrations need to be used wisely or you risk losing discipline to meeting fatigue.

Stakeholders expect the speed and responsiveness of product delivery does not come at the expense of quality. QA tools offer retailers the ability to continuously ensure both business and technical quality standards are upheld, but these tools should not be viewed as a silver bullet.

Product Owners Are Only as Successful as Their Ability to Communicate

No matter how good your product roadmap and backlog are, they are only as good as your audience’s ability to understand your vision and priority.

The scrum master is like the conductor of an orchestra, ensuring that every piece fits together at the right time to create something greater than the sum of the parts. You don’t have to know how to play each instrument, but you do have to understand what each part contributes to the overall masterpiece.

Product Owners: Tools Are Only Part of the Solution

Tools are important to product teams, but only when they support solid people and processes.

Product Owner Capacity Planning Gets a Boost From Aha!

Aha! introduces scenario planning to give product owners the ability to create and compare multiple release approaches based on team capacity and backlog priority.