Indirect Access of SAP Systems May Cost You Millions

SAP customers beware! With the relatively slow uptake of SAP S/4 Hana Cloud Platform and an increased focus on booking cloud based recurring revenues via SAP’s recent acquisition spree (e.g. Concur, SuccessFactors, FieldGlass, Hybris, Ariba), the pressure is immense for SAP to maintain revenue growth. Auditing the existing SAP customer base for indirect access usage, especially for customers with static or declining revenues with SAP, has become a relatively easy way to boost the bottom line. With the recent UK court ruling against Diageo, SAP has the law on its side as it comes knocking on customers’ doors in search of this non-compliance scenario. In today’s cloud-enabled world, where SAP is more frequently the “back-end” system, it is very difficult for most organizations to avoid integrating homegrown or third-party applications into their ERP environments.

The concept and contractual construct of indirect access within software license agreements is not a new phenomenon. Historically, the interpretation and application of indirect usage of software has been the source of massive amounts of confusion in the SAP practitioner community. The recent ruling by the UK High Court in favor of SAP in the case of SAP UK v Diageo Great Britain Ltd has cast a new light on this issue, not to mention sending waves of fear cascading across the SAP’s vast user community. SAP claimed they are due additional license fees and back support in the amount of ~$74M USD as a result of Diageo’s integration and use of the SAP software to third-party software from Salesforce.com. The Salesforce application was utilized by Diageo’s 5,800 customers to place orders with Diageo as well as a second Salesforce application used by Diageo’s sales staff to access customer data residing in an Oracle database supporting the mySAP ERP software. Keep in mind that Diageo is a significant SAP customer that has paid between $53M - $77M USD in license and support fees for use rights of the mySAP Business Suite to date. The fact that SAP has taken this legal action against an existing major customer should send a clear message to SAP customers!

Indeed, a survey of SAP end users conducted by The ITAM Review demonstrates that the issue of SAP indirect access is the top priority: 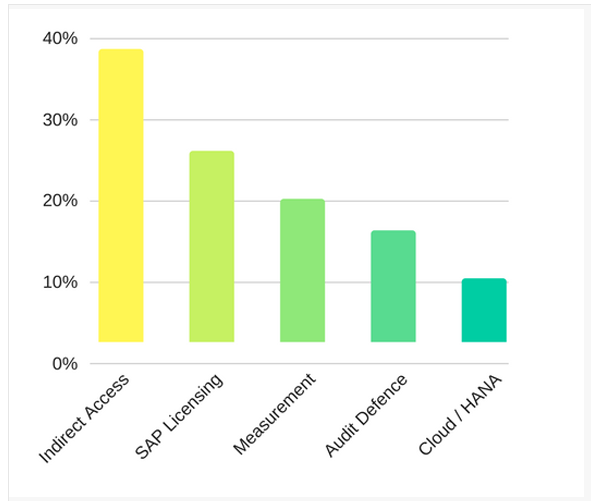 The UK court has ruled in favor of SAP with the exact amount of damages to be determined at a later date. This is a critical point as this type of third-party software integration was ruled to constitute indirect access of the SAP software and, as such, does allow SAP to charge for this usage but the court has yet to determine the value of this type of access. Additionally, another clause within Diageo’s SAP agreement states that any use of the SAP software from which Diageo is not explicitly licensed within the contract, but whereby Diageo derives business benefit, that compensation would be negotiated between the two parties.

SAP’s license agreement with Diageo states that a “Named User” is defined as:

an individual representative (e.g. employee, agent, consultant, contractor) of the Customer, a Group Company, an Outsource Provider or a Supply Chain Third Party who is authorised to access the Software directly or indirectly (e.g. via the Internet or by means of a hand-held or third party device or system). The extent to which a Named User is authorised to use the Software depends upon his user category as set out in the schedule.

While the technical details of the court ruling could easily occupy the body of this research note a few times over, this note will focus on:

This is a loaded question to be sure! Prevailing opinions hold that the customer owns their business data and that infrequent batch data transfers of customer owned data from a SAP system should not constitute instances of indirect access. This sounds logical, however, as will be demonstrated momentarily, logic, technology, and contracts do not always mesh seamlessly. It is more commonly agreed across software licensing specialists that real time (or near real time), synchronous and bi-directional use of the SAP application with another application, as well multiplexing front-end applications that access the SAP software back-end and provide a data interface to innumerable external users can generally be deemed as indirect access and be subject to proper licensing.

For any particular organization researching SAP indirect access, you must refer to your specific contract to find out if and how indirect access is defined. Target areas of the agreement to focus on are the Definitions, License Grant, and Verification sections of the SAP Software License Agreement. Even so, when referencing the Named User definition above, the term “indirect” was not defined in the Diageo contract. It is a frequently reported occurrence that SAP customers actively inquiring with SAP about this type of license compliance are not provided with clear and actionable guidance, and in many cases receive a response from SAP that it is the customer’s responsibility to understand their contract and to stay compliant.

What Are the Risk Criteria for Triggering a SAP Audit?

There are several factors that influence an organization’s risk for being audited by SAP for indirect access, discussed in more detail below:

In the area of indirect access usage for SAP systems, the laws of logic do not rule supreme. It is imperative for organizations to identify their vulnerability to indirect access usage within their SAP environments and to work towards a commercial resolution while resisting the urge to pursue a legal remedy. Negotiating and collaborating with the SAP sales organization will almost always yield a preferred outcome vs. a formal audit conducted by SAP’s Strategic Initiatives Group.

Prepare and Defend Against a Software Audit

Traditional accounting practices are tailor made for waterfall project management. Organizations that have transitioned to the use of standing product teams using Agile and DevOps need to transform their accounting practices as well or they will leave valuable capital expenditure dollars on the table.

Scaling Agile – Essential for Your Organization

So you’ve gone Agile. You do daily scrums, retrospectives, and all the “right” Agile ceremonies. But still your organization isn’t quite convinced. It is now critical to balance the drivers and goals of both Agile and traditional thinking in order to achieve organizational success.

Do you feel like your Agile teams are treading water – going through the motions but never going anywhere? It’s a risk, and practices such as daily standups, retrospectives, and demonstrations need to be used wisely or you risk losing discipline to meeting fatigue.

Stakeholders expect the speed and responsiveness of product delivery does not come at the expense of quality. QA tools offer retailers the ability to continuously ensure both business and technical quality standards are upheld, but these tools should not be viewed as a silver bullet.

Product Owners Are Only as Successful as Their Ability to Communicate

No matter how good your product roadmap and backlog are, they are only as good as your audience’s ability to understand your vision and priority.

The scrum master is like the conductor of an orchestra, ensuring that every piece fits together at the right time to create something greater than the sum of the parts. You don’t have to know how to play each instrument, but you do have to understand what each part contributes to the overall masterpiece.

Product Owners: Tools Are Only Part of the Solution

Tools are important to product teams, but only when they support solid people and processes.

Product Owner Capacity Planning Gets a Boost From Aha!

Aha! introduces scenario planning to give product owners the ability to create and compare multiple release approaches based on team capacity and backlog priority.