Can Box Be Used Instead o... | Content Collaboration | SoftwareReviews
All Research

Home > Research > Can Box Be Used Instead of SharePoint Online in Microsoft Teams?

Can Box Be Used Instead of SharePoint Online in Microsoft Teams?

On March 31, 2020, Box and Microsoft released the latest version of Box’s integration with Teams. This iteration significantly enhanced Box’s capabilities within the Teams app, to the point where organizations are now wondering whether Box – to some, a more intuitive content management solution – could substitute for SharePoint Online.

For those organizations that have Office 365 and want to use Teams but do not have the resources for setting up and managing SharePoint, Box could be an easier option for content management. Indeed, for those organizations that already use Box but want the meeting and collaboration features of Teams, this integration option is even more appealing.

But is it really possible to refashion Teams to this degree and still get optimal use out of it? Or does this strategy cause more problems than it solves? Read on to understand the extent that an organization can use Box instead of SharePoint for Teams, with some best practices for doing so.

Is it worth it?

How does Teams work with SharePoint?

Before you deploy a Box/Teams integration, make sure you understand the Teams logical architecture and the important role SharePoint plays in Teams’ design. 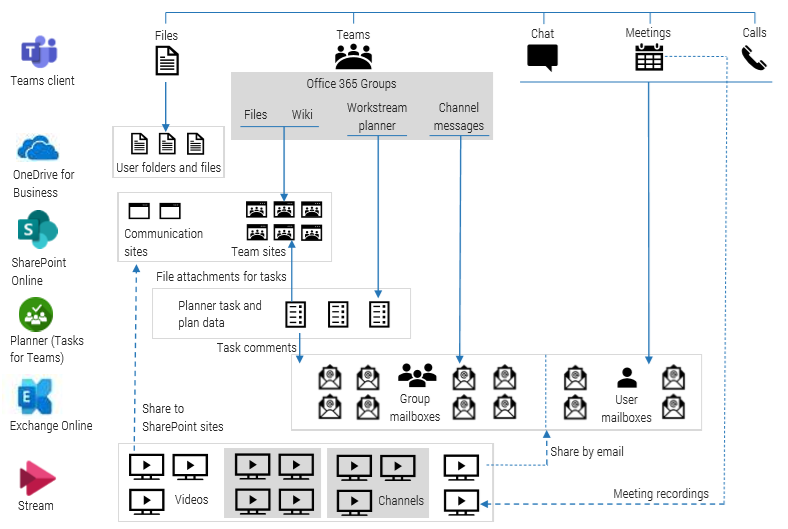 Figure 1. How Teams integrates with other Office 365 applications.

The key takeaway from this above image is that Teams is not a standalone app: Teams is often the front end for many other applications within Office 365. Indeed, Teams’ basic functionality heavily relies on SharePoint being enabled. Each new team created within Teams automatically generates a “Team site” in SharePoint where any files or wikis shared within that team’s channels are stored. What this further means is that Teams itself is not a storage app. Consequently, rolling out Teams without making SharePoint accessible to the end user severely stunts the collaborative functions of Teams – file share and collective document editing is not fully possible.

Can Box replace any of SharePoint’s roles in Teams?

Here is how the Box/Teams integration currently works:

What this immediately tells us is that the Box app is limited to appearing within Teams channels and chat. As such, we cannot do away with SharePoint entirely, as creating a team itself (for channels to appear) still requires SharePoint. One cannot use Teams and Box without SharePoint running in the background; each time an end user wants to create a new team, SharePoint is required on the back end (Box itself acknowledges that neither SharePoint nor OneDrive for Business can be disabled in Teams).

Of course, it is possible to hide SharePoint’s access to end users. An organization can integrate Box and Teams with SharePoint running in the background but prevent end users having access to the SharePoint application itself. The intricacies of needing to set up SharePoint for end users can thus be avoided.

However, the workaround described above still does not mean that an organization can then use Box as the default storage system for Teams. For example, if the paper clip icon is used to share a file (see fig. 2), or if you drag and drop a file into the Teams channel interface, that content is stored in that team’s SharePoint site – this cannot be changed or reconfigured.

Figure 2. Compose box in a Team channel and the messaging extensions below.

If end users are unable to access SharePoint, they ought to be aware that they should only use the Box files tab in their Teams channel interface or share files via the Box icon that appears below the Compose box. Otherwise, the files they share in Teams will be trapped in SharePoint. Users need to understand that Box files shared in Teams are treated as links, not actual files themselves. Consequently, the biggest friction here for socializing this Box/Teams integration will be ensuring end users only send links to the Box files, or upload files through the Box messaging extension icon that appears below the Compose box.

As you rollout your adoption plan, mitigate file-sharing hiccups by setting up retention policies that ensure any information stored in SharePoint by accident is not expired or deleted. Moreover, plan to spend time socializing the approved file-sharing practice in your end users and expect admins to be spending some time rescuing wayward files in SharePoint and responding to queries about lost information.

There are further ramifications of this integration design that inhibit end users’ use of Teams:

Last, because Box is a separate construct from Office 365, note that security policies do not automatically follow through from Teams to Box. You will need to align these policies in both Office 365 and Box, unfortunately doubling the work you need to do in this area.

What about files uploaded in Teams chats?

We have focused on the ramifications of trying to use Teams without allowing users to access SharePoint. However, it is important to keep OneDrive for Business in mind as well: as can be seen in Figure 1, files shared by a user in a chat are stored in that user’s OneDrive.

The Box/Teams integration allows files to be uploaded to Box in 1:1 and group chats as well, or to be shared from Box to the chat. This content is stored in a dedicated folder in Box, but chats do not have Box files tabs like channels do. Once again, users must be careful to share the file using the Box icon below the Compose box to avoid sending files to OneDrive.

Best practices for using the Box for Microsoft Teams integration

If the limitations described above can be appropriately met and responded to, use these following best practices for your Box/Teams integration:

Zoho Workplace – a global enterprise collaboration platform – has reported that it is now supporting 15 million users and is experiencing a surge in usage for its business applications. However, compared to Microsoft’s Office 365 and Google’s G Suite, Zoho still has a long way to go in this marketspace.

Box CEO Aaron Levie recently announced that the company will allow employees to “work from anywhere” until January 2021.

Software that facilitates enterprise file synchronization and sharing (EFSS) is always key to getting work done, but now, with many businesses operating under the necessity of working from home due to COVID-19, it is more essential than ever.

EFSS Market Contraction? Where Are We Now?

Predictions of a major decline in EFSS vendors have not yet borne out.