Automation vendor Ayehu offers a number of built-in features that make its platform more useable. Ayehu is a tool that allows users to build event-driven automated workflows in their environments. Users do so by arranging activities, such as opening a ServiceNow ticket or taking a virtual machine snapshot, into a workflow of activities based on the business logic.

The key to successful automation, as Ayehu acknowledges, is knowing and understanding that business logic end-to-end. But Ayehu gives its users a good deal of assistance in building workflows out of the box.

In the first place, Ayehu comes with a toolset of 500 pre-built activities. An activity is any action taken in your environment. Ayehu takes action by integrating through native APIs with some of the most common applications (e.g. ServiceNow, Salesforce), and allows for the building of new integrations if required. 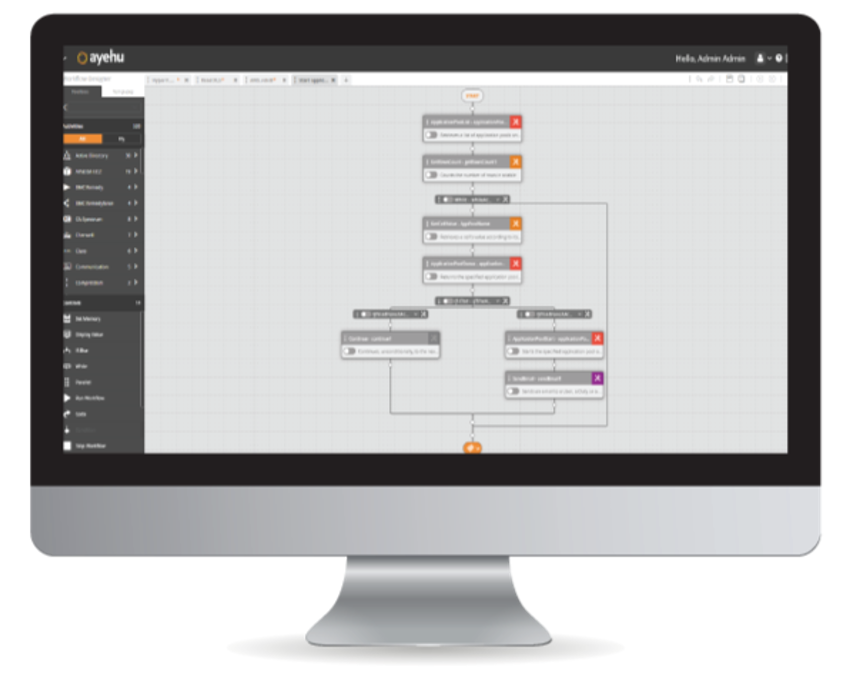 Tool administrators can drag and drop these activities in a GUI and connect them with business logic into the automated workflow. But they are not entirely left on their own in determining how to do so.

In the first place, Ayehu comes with 125 pre-built workflows, which users can run out of the box if appropriate, or adapt as necessary to suit their environment. An example of a pre-built workflow would be something like “Find zombie Active Directory users.”

Furthermore, Ayehu also uses AI to provide live suggestions to tool administrators on the fly. While a user is dragging and dropping activities into the workflow in the GUI, Ayehu can provide suggestions for the next part of the workflow based on the context and on comparison with common patterns. For example, the tool can recognize when the user may want to insert a branching "if-else" decision point in the workflow's business logic.

Ayehu’s goal is for an organization to be able to take its most junior SysAdmin, train them to use Ayehu in a single day, and then end up making that tool administrator into the most productive member of the organization.

This is a lofty goal. As automation capabilities of different tools in the market continue to expand, user-friendliness will be a key differentiator among solutions. Ayehu is already positioning itself to be a more intuitive, user-friendly automation tool.

Enabling the necessary customization for each enterprise’s unique IT environment while also running out-of-the-box is the key challenge faced by vendors. Info-Tech expects that automation vendors will continue to compete over the out-of-the-box usability and configurability of their solutions.

Ayehu is expanding its footprint in automation in the applications space. Info-Tech expects that automation vendors will compete based on their application automation capabilities.

TietoEVRY and Ayehu have announced a partnership. This partnership aligns with the strategic priorities of both companies.

Microsoft has announced self-service purchasing, the ability for any O365 user to buy Power Platform products directly through their corporate O365 tenant. This raises numerous concerns with IT leaders and O365 administrators.