Amazon Web Services (AWS) pioneered the Infrastructure-as-a-Service (IaaS) industry, touting the prediction that private data centers would eventually become a relic of the past. Ironically, AWS now finds itself moving hardware and software into its customers’ data centers with AWS Outposts. But that’s not all. AWS is also “filling the gap” with small data centers located near high-traffic urban hubs.

It’s always nice to start off a research note that focuses on IaaS public cloud vendors with a market share update. Well, not much has changed over the past year as AWS still dwarfs everyone in terms of overall market share. A quick look at the major IaaS cloud players highlights some crucial differences in terms of the maturity of this vast market, which is still growing at a torrid pace of around 40% annually, clocking in at around $80 billion in IaaS annual revenues. 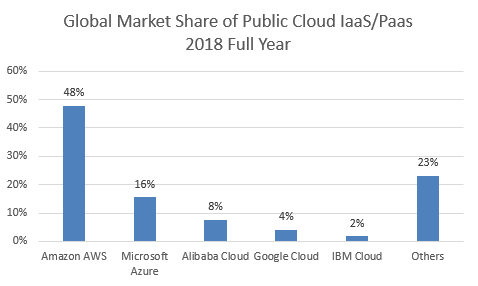 Google: Google Cloud Platform (GCP) is just now trying to become a serious player in the enterprise space with the hiring of Thomas Kurian from Oracle to become GCP’s CEO. Those customers with significant annual spend that are looking for the best deal on pricing and terms flexibility may find GCP to be a match made in heaven. With an annual run rate approaching $8 billion and 9% total IaaS market share, GCP is pulling out all the stops to take deals from market leaders AWS and Azure.

Microsoft: If you were to listen to the hype, you might think that Microsoft’s Azure cloud platform was about to catch up to the mighty AWS. And you would be dead wrong. Microsoft does not break out Azure IaaS revenues from its overall Software-as-a-Service (SaaS) and Platform-as-a-Service (PaaS) offerings. However, industry estimates peg Azure revenue at around $16 billion annually, which carries a 19% market share, still only half that of AWS.

Many CIOs are attracted to Azure due to the built-in integrations with Office 365 and the various other Microsoft products (e.g., Exchange, SharePoint, Windows Server, SQL Server).

Additionally, Microsoft has the most in-depth experience of all the public cloud vendors in selling and servicing the enterprise.

Microsoft has also been aggressively inking partnerships with frenemy vendors SAP, Oracle, Adobe, and even GCP. All in an effort both to ensure an open ecosystem that enables interoperability between cloud platforms (multicloud) and to position itself as the IaaS vendor of choice.

At the end of the day, AWS is holding onto its market share and is vastly ahead of Azure in terms of the sheer number of options, features, and functions available to the market.

While the competition seeks to establish themselves as credible cloud rivals to AWS, AWS continues to provide differentiating services to customers in ways that resonate with their unique business requirements.

However, one area that AWS is just now getting into is the area of hybrid cloud solutions with the formal release of AWS Outposts. Microsoft and Google have already been in the hybrid cloud market with their respective solutions Azure Stack and Google Cloud Anthos.

AWS has taken its time rolling out Outposts and has likely learned from the early obstacles faced by Microsoft. To that end, all three solutions ostensibly provide original equipment manufacturers (OEMs) with the ability to run hybrid workloads across on-premises workloads and the public cloud. Amazon seeks to take this approach a few steps further to differentiate its offering:

The move into hybrid computing by AWS signals their desire to break deeper into the Fortune 500, where industries are more highly regulated and data workloads cannot yet be moved wholesale to the public cloud. Industries that require core system transactions to run locally can now bridge the gap with applications designed and optimized to run in the cloud. As an example, in the healthcare space, regulated health data can be stored on-premises but have cloud-based machine learning and analytics capabilities applied to that data set. Similar use cases abound across manufacturing, financial services, retail, and other industries.

It seems AWS Outposts may offer the ability for organizations to enter the hybrid cloud arena with ease compared to legacy solutions currently in the market. This may alleviate customer concerns over order delays, logistics hassles, and the technical skillsets required to manage these clouds in customer environments.

The release of Outposts is telling because AWS has been a pure public cloud workload advocate, similar to Oracle being the poster child for the “anti-cloud” movement. The fact that Outposts was designed, developed, and released in such a short time after the Azure Stack release, inclusive of next-generation improvements, is a testament to Amazon’s ability to pivot to their customer needs despite an opposing industry theme dominating their corporate ethos.

But that’s not all that was announced at this year’s conference. AWS is also rolling out mini data centers (DCs) running the Outposts appliance stack strategically located near major cities. The first mini Outposts DC is located in Los Angeles, where there is a heavy concentration of content creation companies that depend on low-latency, high-volume, high-speed connections. This option intends to stem on-premises database spending by providing a middle-of-the-road offering between the traditional DC and nearest Availability Zone.

In fact, Verizon plans to be an early customer of this mini-DC offering. Verizon will use it to power its 5G cellular network using AWS’s newly released Wavelength service. AWS Wavelength “enables developers to build applications that deliver single-digit millisecond latencies to mobile devices and end users.” By leveraging Wavelength within the mini DC, Verizon can offer 5G-level performance for video games, video streaming, and VR/AR and avoid the high traffic volumes moving all the way back to AWS’s nearest Availability Zone.

According to Rightscale’s 2019 State of the Cloud report, 58% of enterprises are planning a hybrid cloud strategy, up from 51% in 2018. Yes, Amazon may be coming to the game a little later than the competition. However, their go-to-market strategy has a laser-like focus on the customer. The Outposts solution seeks to make a complicated technology strategy as user-friendly and frictionless as possible. Coupled with the innovative mini-DC strategy and a core focus on large enterprises that can benefit from these capabilities, this solution may yet again lead AWS to the front of the pack in another crucial area of cloud services.

The Private Cloud Is Not What You Think

Provisioning Servers for Serverless Computing – What?

AWS Outposts: The Cloud Can’t Do It All