The service allows developers to define cloud infrastructure along with their application code, in order to provision that infrastructure using AWS CloudFormation.

CDK makes it quicker and easier for users to define how to provision cloud infrastructure.

A typical application running in the cloud might consist of a front-end web server, a back-end application that processes transactions, and a database.

Before CDK, there were a couple different ways users could build and run such an app in AWS:

In either of these cases, the users who administer those AWS resources must often do a good deal of heavy lifting to effectively architect the cloud components of the application. Now they can define cloud resources as abstractions within the code itself.

These resource abstractions are called “constructs,” and are defined entirely using CDK parameters in code: TypeScript, Python, or JavaScript.

CDK will use intelligent algorithms to produce an appropriate CloudFormation template to build the entire application stack.

For example, CDK will automatically instantiate the least-privileged access security permissions necessary for your services to run, and prompt the user to approve those security configuration changes.

The user can declaratively define the desired architecture of the application stack, and CDK translates that into the appropriate AWS identity and access management (IAM) and security settings. 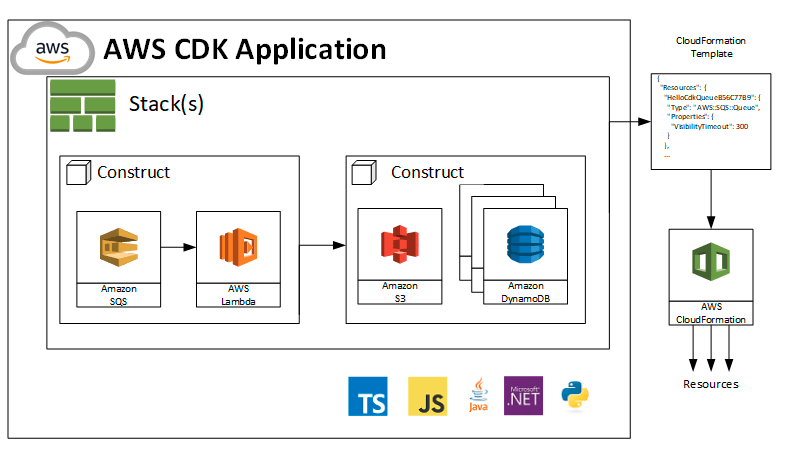 Source: What Is the AWS CDK?

For anyone who knows the hassle of sorting out the various security settings and permissions for AWS services, CDK comes as a huge step forward in the usability of the platform.

Furthermore, CDK allows for infrastructure resources and patterns to be reused. Rather than building everything from scratch each time, we can save and share the artifacts built in CDK with other teams or even other organizations.

Developers have become accustomed to re-using code, but many IT professionals have yet to grok the idea of reusing infrastructure. They will have to adopt a different way of thinking and working in order to take full advantage of such expanded infrastructure-as-code capabilities.

The challenge for IT professionals will be to keep up with the pace of these changes to fully unlock the value of infrastructure as code for their organizations.