SAP continues to claim robust customer adoption of the S/4HANA ERP suite. Current SAP ECC customers find themselves being both cajoled and levered to adopt the new SAP offering. Should existing SAP ECC customers cave into the demands and promises of SAP’s S/4HANA nirvana? Or is the more prudent course of action to stay the ECC course and call SAP’s bluff on the looming end-of-support date in 2025?

SAP is driving their customers to adopt S/4HANA by three methods:

These approaches embody the adage “by hook or by crook” as SAP seeks to force-migrate and cajole customers to S/4HANA by any means necessary.

In its Q3 2019 earnings presentation, SAP claims that S/4HANA customers are up 25% to 12,000 customers, of which around 40% were net new customers. SAP has 46,000 customers worldwide. This means approximately 26% of SAP customers have entered into some form of S/4HANA contract with SAP. It is important to note that SAP touts the 12,000 S/4HANA customers without providing context around what this number means.

The contracted customer number for S/4HANA can be further parsed to yield insights on more accurate adoption rates, but let’s look at the gross S/4HANA contract growth compared to the end of support date in 2025. We know the current customer count with S/4HANA contracts, as SAP has reported, is 12,000: 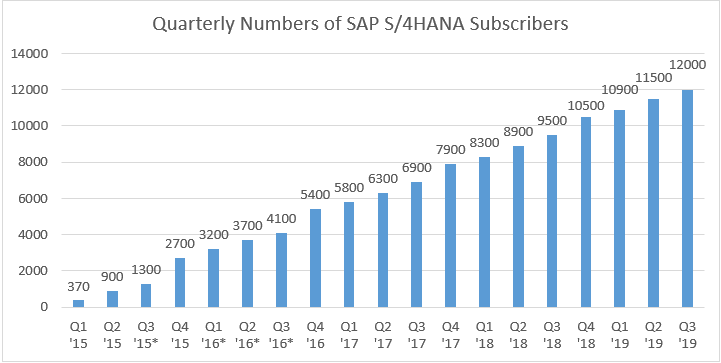 Unfortunately for SAP, the growth rate of new S/4HANA customers quarter over quarter (QoQ) does not mesh with the data presented in the Q3 2019 earnings call, which states an S/4HANA growth rate of 25%. In fact, the easy math shows this growth rate is 4%. Also, the annual growth rate for S/4HANA contract adoption is dropping by around 30% per annum! Taking these measurements and incorporating them into a forecast yields the following S/4HANA contract subscription estimate:

Current growth rates do not include the likely obstacles and constraints SAP will face in migrating such a large account base to a new ERP system, such as the necessary consulting ecosystem to perform the migrations. But even assuming none of those issues will arise, SAP ends up with 28,751 customers on S/4HANA contracts by the end of 2025 – around 63% of their customer base.

CIOs regularly tell us how they are preparing for the move to S/4HANA, primarily as a result of the announced end of ECC support in 2025. Most industry analysts are unwilling to challenge this date directly, and I find this disturbing on many levels because the 2025 date is all but a mathematical impossibility, based on the above analysis. Suffice it to say that SAP will not be able to discontinue ECC support in 2025, with only 63% of SAP customers under contract for S/4HANA, in some limited form in most cases.

This is a reactionary response on the part of many CIOs, and one that can be fatal to many enterprises, as the road to S/4HANA is paved with the same challenges as the road to any ERP implementation. In short, this is no simple upgrade; this is a replatforming of the core ERP system. CIOs contemplating this move are best served by revisiting the multitude of ERP offerings as a whole and, at a minimum, building leverage in their dealings with SAP in the process.

Conservative estimates assume a full-blown ECC-to-S/4HANA implementation will cost 2.41x of the net new license cost for S/4HANA licenses and take one to two years to complete. This process will be measured in the millions of dollars of spend and great opportunity cost for most enterprises. In most cases, S/4HANA does not provide a business case based on most TCO/ROI models that would justify this level of expenditure or project time commitment. CIOs that really buy the hype that ECC support is going away should at least consider market alternatives and take a fresh look at their ERP options.

If the analysis provided above does not alleviate the fears of many CIOs, let’s dig deeper and look at the numbers around S/4HANA systems in production. It bears taking a moment to delve into subscription rates vs. implementation rates. SAP is reporting the number of customers that have executed an S/4HANA contract. Many incentives are being offered to existing customers to sign on to S/4HANA. However, CIOs contemplating this path must realize that merely signing up for one or two S/4HANA modules does not equal a successful migration to S/4HANA.

Most SAP customers are signing S/4HANA contracts in a piecemeal fashion. In some cases, the incentives to contract for S/4HANA are tied to discounts on other SAP products and licenses that the business requires irrespective of S/4HANA. Most companies are signing up for one or two modules of S/4HANA, with the most popular being SAP Finance, and not the full ERP suite. It also bears noting that the implementations of these “contracted” modules often do not occur for years after contract execution, if at all.

While hard data on S/4HANA “go-lives” is not available, calibrating from multiple sources indicates that at most 25% of contracted customers have crossed the go-live finish line. Extrapolating from our most recent data point of 12,000 contracted customers, this leaves a maximum of 3,000 organizations running some portion of their business on S/4HANA.

It does not take a math genius to realize that S/4HANA implementations will fall well short of the goal line by 2025. As we shall discuss below, skilled resource constraints will likely be a material barrier to customer adoption, even though that exact fear is driving some enterprises to accelerate their move to S/4HANA. Even if we assume an aggressive implementation ramp-up of 25% growth per annum, the total install base would still fall short of 10,000 organizations or well less than 25% of the SAP account base. Now consider that up to 70% of ERP implementations are deemed a failure in terms of cost, budget, and scope, and this 2025 date becomes even more unrealistic.

The second reason I hear CIOs using to justify the move to S/4HANA in record speed is the concern that qualified technical resources will be scarce as the 2025 end-of-support date approaches, leading to higher resource costs and lower availability. To be fair, there is already a dearth of skilled, certified S/4HANA consultants, and this will be a concern that persists for the foreseeable future.

Let’s first look at the total number of “Certified Individuals” as posted by SAP: 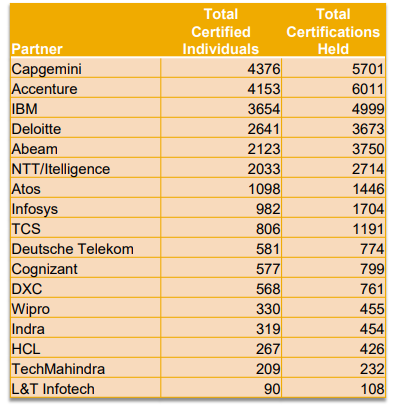 When drilling down to the S/4HANA level of detail, the numbers are eerily small.

So barely over 10,000 total consultants certified in some aspect of S/4HANA. Should this be a driving force to rush adoption? Or should CIOs pause and realize that this is a long-term game and that SAP will not be able to dictate the timing and outcomes? To be sure, the S/4HANA resource crunch is real and will likely worsen before improving over time. However, this presents CIOs with a hidden opportunity to take a step back and methodically plan the evaluation of their ERP options both within the SAP ecosystem and in the greater market.

Options and Next Steps

My fellow analysts in the IT world are not wholly incorrect when they state that taking no action is not a strategy. But frequently, the best lie is a half-truth! Measures need to be taken, but not necessarily to jump on the S/4HANA bandwagon as is so often the recommend course of action. Below are some core recommendations to help outline the next steps to consider in this ERP journey.

Future notes will focus on the key challenges and considerations that CIOs must carefully consider when making the jump to S/4HANA, but before you get to that point, weigh the following as viable alternatives.

It bears noting that leaping towards S/4HANA should first be justified through careful planning, the results of which demonstrate an alignment between the organization’s ERP transformation vision and the demonstrable functionality brought to bear against that vision with the S/4HANA platform. If your organization has done the footwork (and brought out the math pencils) and this solution is the best fit, then full speed ahead.

However, many enterprise CIOs tell a different story. They feel the current ECC version of SAP is finally performing adequately, often after years of customizations, upgrades, and fine-tuning. Now they are being told they must move to S/4HANA or lose support. And you need to do it now to beat the rush, while consultants can still be found!

CIOs can rest assured that there are more options on the menu than what SAP advertises as today’s specials.

The math did not add up for SAP to sunset license support for legacy ECC/Business Suite 7 clients, as we predicted. I’ve fielded numerous calls asking, “Will SAP hold firm on its 2025 end-of-support date?" We finally have SAP’s answer: a resounding “NO.”

SAP’s native-cloud play through S/4HANA dangled the hopes of a simplified license structure to SAP customers. Instead, SAP customers now must navigate four distinct license models, each tied to a separate deployment model.

Artificial intelligence continues to fuel the arms race among ERP vendors. Earlier this year, Oracle announced that it has extended the AI (machine learning, to be more precise) capabilities within the ERP Cloud and EPM Cloud products.

Oracle's OpenWorld Takeaways Are Impressive but Leave Us Wanting More

It is no surprise that this year’s OpenWorld conference continued to focus on Oracle’s cloud efforts. We dive in to discover if Oracle is doing enough to catch up to the competition of Amazon’s AWS, Microsoft’s Azure and Office clouds, and Google’s GCP.

Our mission is bringing transparency to the software marketplace. To do that, we need to ensure reviews are completed by real users providing real data that you can trust for your software decisions. This does NOT allow us to post anything to your LinkedIn. It just confirms your identity.