A Primer: How IBM Prices Software and Support

Historically, purchases of IBM software licenses and support are priced based on the product Base Level list price and then discounted based on the number of points accumulated under IBM’s Relationship Suggested Volume Pricing (RSVP) discount program. Points are accumulated through purchases of IBM hardware, software, and S&S, and discounts rise as points are accumulated; this results in a Suggested Volume Price (SVP), also known as an Entitled Price.

Note: There also tiers for “I” and “J” that are considered Special Bid tiers, as well as education (ED) and government (GOV) discount tiers. Typically, Government and Education discounts are static at 30% off SVP.

When new licenses are procured, the customer will start with their Entitled Price and may negotiate subsequent additional discounting if conditions permit (i.e. competitive bid). The final net license price then has S&S attached at 20% of the net license price. IBM further clouds the pricing on initial software license acquisitions through bundling the license cost and the first year of S&S into one single price and part number. These are "D" part numbers, whereas ongoing S&S are "E" part numbers.

This example is for illustration purposes to demonstrate how S&S pricing operates under the RSVP program:

In this example, the customer’s entitled price is $2,497 less than the pre-discounted SVP price.

Pro Tip: Keep in mind there is also a Suggested Retail Price (SRP). Be sure to compare your entitled price to the SVP and not the SRP.

IBM’s recent announcement essentially throws a monkey wrench into the entire discount program and example shown above. The announcement, quite brief in length, raises many more questions than it answers. However, the one clear answer is that IBM customers are in for a significant price increase as their S&S support renewals come due.

IBM is making changes to its Passport Advantage benefits by removing the entitled discounts for a select number of products traditionally deployed on-premises. Entitled discounts will remain unchanged for our on-premise hybrid and multi-cloud platforms, where we will continue to focus our investment and innovation. Your company will still be able to earn points on the offerings no longer eligible for discounts. For new purchases, your company will enjoy more extended term benefits and entitled discounts when adopting IBM’s equivalent cloud and hybrid-based offerings.

Based on these changes to entitled discounts, it is recommended that your company evaluate and plan a transition to the equivalent, cloud- and/or hybrid cloud-based offering. Please consult with your local IBM Sales representative or IBM Business partner to and make any recommended changes to your portfolio of IBM offerings accordingly.

IBM's intent with this change in policy is to force-migrate its legacy client base to IBM's new cloud and hybrid cloud offerings. A snapshot from IBM’s most recent Q2 earnings presentation clearly shows where the focus lies ahead: 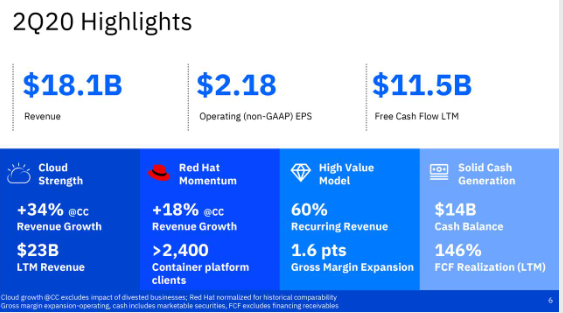 Now, IBM S&S was not inexpensive, to begin with, as customers that were not locked into a multi-year deal or that neglected to negotiate effective escalation rate caps frequently find themselves battling with IBM annually. IBM will typically attempt to raise S&S costs by up to 10% annually until the S&S price equates to 20% of the SRP (retail) list price. The goal is for everyone to pay list price eventually.

The revised terms of the Passport Advantage (PA) have moved the goalposts for the millions of existing IBM customers benefiting from S&S support fees that are discounted against the entitled RSVP volume pricing. The one clear result from this change is that all new perpetual, on-premises software license purchases from products listed on the announcement (>5k SKUs) will now start at retail list price (SRP) with S&S pegged at 20% of list price! This is deadly as IBM can now raise prices on two levels: 1) increasing the list price of products and 2) bringing existing customers up to S&S priced against retail list.

But what about all those legacy S&S contracts on the books, totaling many billions of dollars in annual revenue? What can customers expect come renewal time? Here are some questions that are currently unanswerable:

IBM customers need to reach out to their account teams now to both inquire and express dissatisfaction with this jarring change to S&S pricing. In light of the sea shift in strategy to go all-in on cloud, even massive customer backlash is unlikely to move IBM from this new position on legacy product pricing. However, if significant in volume and harsh in tone, IBM may soften on ad hoc negotiations for new license purchases and support renewals. We venture that IBM will still negotiate with its customers and the attainment of significant discounts are feasible, especially for larger spend clients.

IBM customers need to negotiate around the following key areas:

Red Hat Customers Should Be Reeling From IBM’s Buyout

Is Oracle Finally Poised to Catch Up in the Cloud?

IBM Unleashes Watson Across All Clouds

How BigFix Administrators Need to Prepare for the Divestiture