Home > Categories > Privacy > Weighing the Price of a Data Breach: FTC Fines Facebook and Equifax in the Same Week

Home > Categories > Privacy > Research > Weighing the Price of a Data Breach: FTC Fines Facebook and Equifax in the Same Week

Weighing the Price of a Data Breach: FTC Fines Facebook and Equifax in the Same Week

The FTC announced its record-breaking $5-billion penalty against Facebook on July 24, which also comes with new compliance requirements and changes to the company’s operating structure. Facebook is submitting to the decision after a year-long investigation by the FTC into a scandal involving political campaigning firm Cambridge Analytica. The firm launched a Facebook app called “This Is Your Digital Life” and encouraged users to complete a quiz about themselves. In doing so, the users agreed to hand over not only their own personal data but that of their friends list as well. Facebook later confirmed that as many as 87 million users were affected, with 70.6 million of those being from the US.

Considering the sensitivity of the data breached, the Equifax data holds more value. Hackers could use the harvested social security numbers for identity theft and credit fraud. In the Facebook breach, Cambridge Analytica used the data to target users with political ads. So why does the Facebook case justify such a severe markup on the fine?

The FTC says it’s because Facebook failed to follow a settlement made in 2012. That order, which didn’t include a fine, required Facebook to “give consumers clear and prominent notice and obtain their express consent before sharing their information beyond their privacy settings.” However, the FTC says that in the years since making that promise Facebook has fallen short in several ways:

So while the FTC says that both Equifax and Facebook are guilty of the FTC Act’s prohibition against deceptive practices, only Facebook violated a previous FTC order. That’s the main justification for hitting it with a heavier gavel: it’s a repeat offender.

Further, while Equifax’s data breach was caused by negligence in a security lapse that allowed criminals to make off with the data, Facebook’s incident was the result of its intentional actions to siphon data out to third parties. 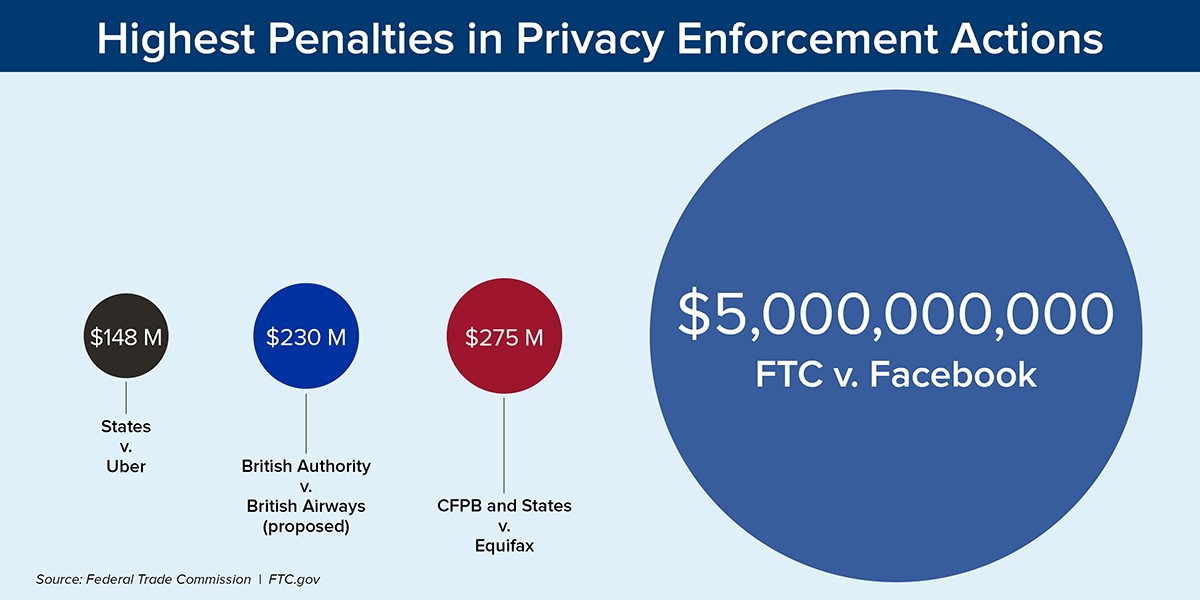 The FTC says its $5-billion penalty against Facebook is almost 20 times greater than the next largest privacy or security penalty ever imposed worldwide. Source: FTC.

Facebook may appear to be harder hit by the FTC’s punitive actions at first blush, but what do the penalties look like when compared against company financials? With the help of David Tomljenovic, principal advisor in InfoTech’s financial industry practice, let’s take a look at the numbers:

Looking at it this way, Facebook’s fine will have much less impact on its financials compared to that of the Equifax fine. In fact, Facebook has already set aside $3 billion toward paying the settlement, and its quarterly revenue earnings announced this week exceeded $5 billion.

The recent Schrems II invalidation of the EU-US Privacy Shield has added a layer of difficulty for organizations that operate across borders, as they now require additional contractual clauses and measures in place to ensure data can transfer freely. Privacy program management vendor Proteus-Cyber offers a streamlined solution with the release of its Transfer Impact Assessment tool.

OneTrust challenges the antiquated idea of data privacy and artificial intelligence (AI) as stark opponents, with the introduction of OneTrust Athena, the vendor’s AI and robotic automation-powered platform.