Microsoft’s introduction of Azure Dedicated Host, a single-tenant cloud hosting service that allows its users unprecedented visibility and control, is a nod to the endurance of on-premises software deployments.

Dedicated Host is Microsoft’s answer to licensing and opacity concerns with the cloud. It extends visibility into the server infrastructure, allowing users the ability to see the number of cores, the processor, and the host type, all of which can be valuable from a performance or compliance perspective.

It’s not just about performance, though. Licensing will change as well, with Microsoft limiting the ability to run on-premises licenses in public clouds’ dedicated hosting services, including Azure Dedicated Host, Amazon EC2 Dedicated Hosts, VMware Cloud on AWS, and Google’s single tenant service. You won’t be able to use on-premises licensing for any of these services, but you will be able to use the Azure Hybrid Benefit for Windows Server and SQL server in Azure Dedicated Host. These changes take effect for licenses purchased after October 1, 2019.

This, naturally, is not good for Amazon or Microsoft’s other IaaS competition. By making it more expensive for users to run Microsoft products on others’ public clouds (but extending its own service a reprieve with the Azure Hybrid Benefit), Microsoft is raising the stakes in cloud competition. Given Microsoft’s substantial datacenter footprint, this is an important development.

What is more interesting is the implications for the directions of infrastructure-as-a-service more generally. Other providers like Google and IBM have emphasized hybridity, and with their Azure Stack platform, Microsoft hasn’t been entirely mum on this front. But with this announcement, Microsoft appears to be circling the wagons around its core product suite. Is the hybrid future dead before it gets a chance to really live?

Probably not, but this is an important development either way – at least if you care about your Microsoft spend. 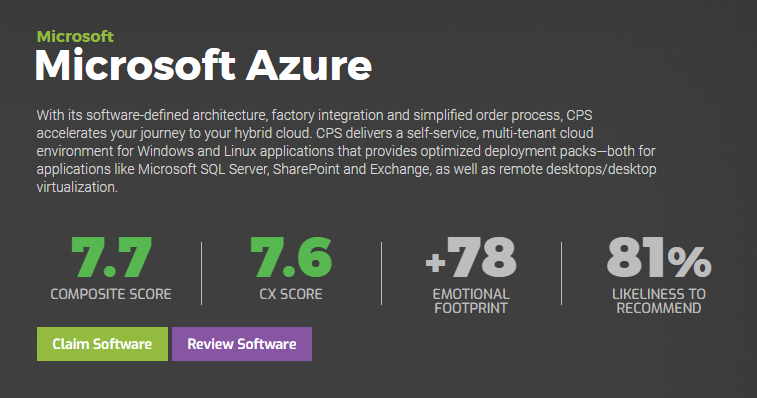 Check out the ratings of Microsoft Azure on SoftwareReviews, Accessed August 21, 2019

Modernize Your Microsoft Licensing for the Cloud Era

Other Recent Research in Cloud Infrastructure as a Service