Home > Categories > Backup and Availability Software > NetApp Is the Storage Comeback Kid. Should You Care?

NetApp Is the Storage Comeback Kid. Should You Care?

NetApp is back. A storage vendor that was increasingly dismissed as yesterday’s technology is making waves in two areas where it appeared it had missed the boat: flash storage and hyperconverged infrastructure (HCI).

Just over two years ago NetApp was in trouble. The company was losing money and market share and looked vulnerable as the storage market was being shaken up by an overall decline in sales and innovative newcomers. But in 2017 NetApp turned things around. They are growing their business and their market share again.

Things didn’t look nearly so promising at the end of 2015. From the point of view of the storage industry analyst, it seemed like nobody was putting NetApp on their shortlists any more. When flash took off it was Pure and ExtremeIO and “hybrid” disk/flash startups like Nimble, Tegile, and Tintri. Then, as HCI gained steam, it was Nutanix and SympliVity on the shortlists.

NetApp was nowhere in these discussions. In fact, NetApp was only mentioned in terms of legacy technology, as in, “We are looking to replace our old NetApp storage. What do you think of Nutanix?”

Like entertainment reporters keeping death watch on an aging movie star, many analysts started working on their NetApp obituary. Here is an example of the “NetApp is old technology” narrative. In 2016 Chuck Dubuque, Senior Product and Solution Marketing Director at Tintri, said that NetApp’s Data Fabric vision sounded future-looking but was just a dressing up the past.

“NetApp is trying to dress-up ONTAP, but the reality is that it’s a legacy solution ill-suited to the modern data center,” wrote Dubuque. “And while SolidFire is the latest addition to the wardrobe, its operating system is built on the same LUNs and volumes as NetApp — originally designed for physical workloads. Rather than being a natural fit, it seems to us that NetApp’s Data Fabric is more like 1970’s polyester.”

NetApp Got Nailed by the Future

So what happened to NetApp and how did they come back? Consider this three phase view of the development of enterprise storage from Info-Tech’s Modernize the Data Center with Software-Defined Infrastructure blueprint. 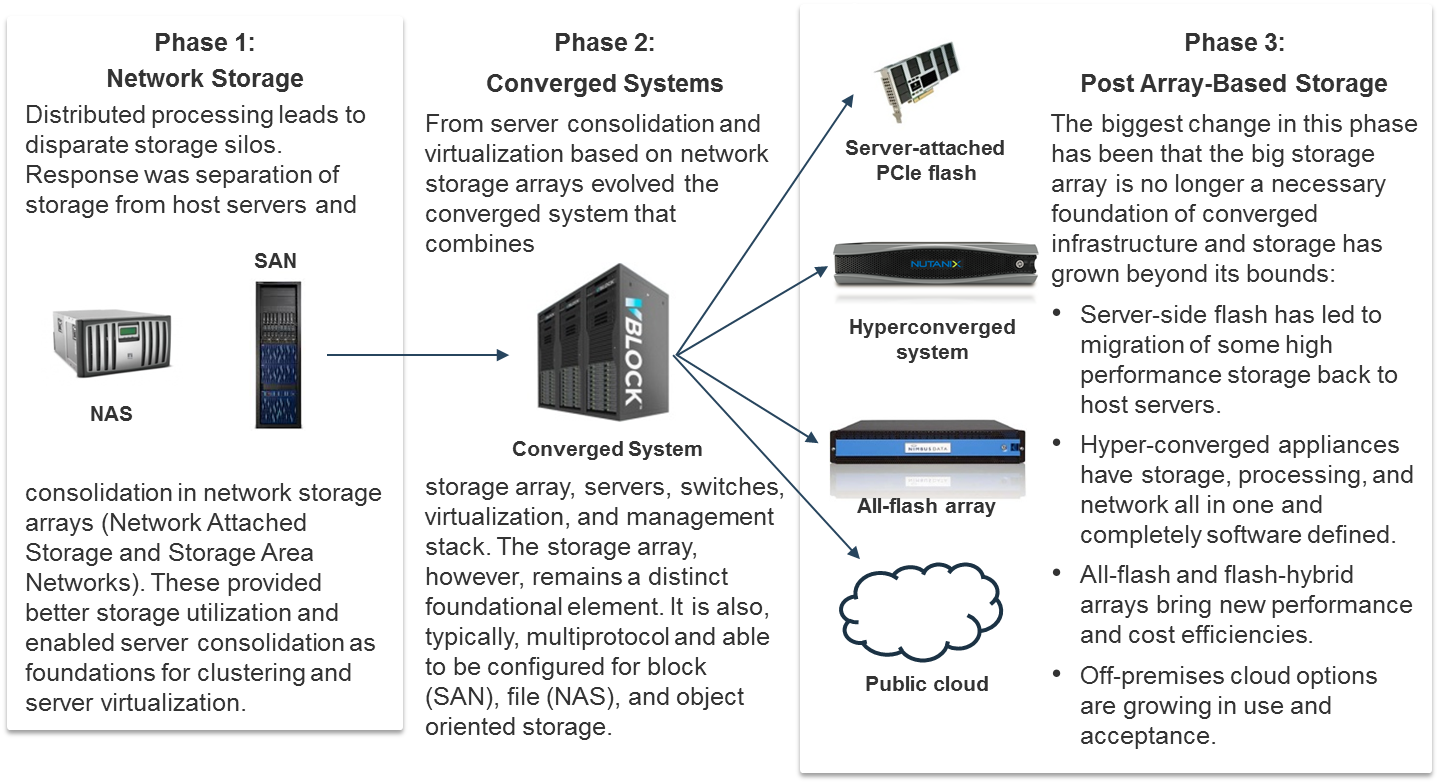 NetApp was a leader in Phase 1 and Phase 2, but they got nailed by Phase 3.

The story of enterprise storage over the past decade has been very much the story of infrastructure consolidation and server virtualization (Phase 1 and Phase 2 above). The dominant storage for the data center was the big storage area network (SAN) or network attached storage (NAS) disk array. NetApp, with its innovative ONTAP operating system and unified SAN and NAS arrays, was a leader for much of this history.

Manufacturing was a major constituency for NetApp storage but also healthcare, higher education and, in fact, any midsize to large enterprise needing a resilient foundation for a consolidated infrastructure (typically with blade servers and VMware virtualization). The epitome of NetApp’s Phase 2 success is FlexPod, a converged infrastructure architecture that combines NetApp storage with virtualized Cisco servers.

“Reports of my death have been greatly exaggerated” – Mark Twain

Since mid-2016 NetApp has proven the technology vendor axiom: If you can’t ignore it, you have to embrace it. (Is that really an axiom? It is now!) The very trends that were killing NetApp were embraced and are now fueling growth.

Data Fabric was an embrace of another disruptive trend — software defined storage. Here NetApp also struggled at first, when it introduced the form in version 8 of its Data ONTAP operating system. But they were on the right track. Abstraction is the future, not the past. This is not polyester.

The basic recommendation here is that if you are looking to acquire storage — either traditional external array, converged systems, or hyperconverged systems — NetApp is a legitimate competitor for your short list. Here are three considerations:

Though definitely late to the party, NetApp has managed to weather the storms of hyperconvergence, flash storage, software defined, and cloud. Rather than being crushed or marginalized by these trends, it has managed to embrace change. While the whole storage industry remains in disruption (and some say decline), NetApp has performed better than any of the other ‘usual suspect’ top line enterprise storage vendors (IBM, HPE, Dell, Hitachi).

Other Recent Research in Backup and Availability Software

Veeam to be acquired by Insight Partners for US$5 billion: On January 9, 2020, Veeam announced that it has entered into a definitive agreement of purchase with Insight Partners.